Learn how to enable Get Windows 10 app icon in Windows 7 taskbar or Windows 8.1 taskbar to reserve your free Windows 10 upgrade.

According to the previous announcement of Microsoft, Windows 10 will be a free upgrade for Windows 7 and Windows 8.1 computer users. That’s why they have included a Get Windows 10 app on the taskbar of your computer which will help you to reserve your free upgrade to Windows 10.

If you are running the qualified Windows 7 SP1 or Windows 8.1 update on your Computer then you will be able to see the “Get Windows 10” app icon in the system tray or taskbar to reserve your free Windows 10 upgrade efficiently.

Although, countless of Windows users are not being able to see “Get Windows 10” app icon on the taskbar of their PC in spite of having the genuine version of Windows 7 and Windows 8.1 operating system. If you are also one of them then this Windows tutorial will help you to find out – Why you are unable to see the Get Windows 10 icon on your PC? and, How to show up or enable “Get Windows 10” app icon in Windows 7 and Windows 8.1 taskbar?

Why you are unable to see the Get Windows 10 App icon on your Computer’s Taskbar?

If you are using genuine version of Windows 7 or Windows 8.1 and want to reserve your Windows 10 upgrade as soon as possible but you are unable to see the Get Windows 10 app icon in taskbar of your Windows computer then following reasons might be:

If you have already configured all settings and installed Windows Updates too but still don’t see the Get Windows 10 App icon then follow below mentioned methods to enable “Get Windows 10” app icon in Windows 7 taskbar or Windows 8.1 taskbar. Here is the step by step instructions:

Step (2): Copy the following text and paste into the notepad:

Step (3): After that, Save the Notepad file with the name “ReserveWindows10.cmd” and select Save as type “All files (*.*)” then save it in C drive. For example: save the file to the C:/Temp folder

Step (4): Now, open the command prompt with administrator privileges. To do so, type cmd in the search box and right-click on cmd.exe from the result then select Run as administrator)

Step (5): After opening the command prompt, now run the file “ReserveWindows10.cmd” from the location you saved.

For the example: If you have saved “ReserveWindows10.cmd” file in the C:/Temp folder then you have to type the following file location in Command Prompt window and then hit Enter:

Step (6): Once you run the file, the script will start checking system compatibility and creating status reports.

Step (7): If your PC is compatible according to the Microsoft Compatibility then you will see the success message at the end of the report. As shown in below screenshot: 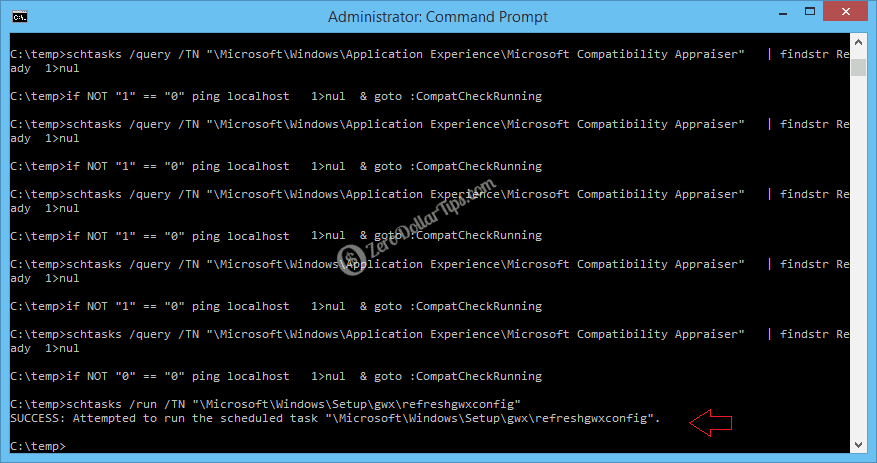 According to the Microsoft, The Microsoft Compatibility Appraiser can take 10 – 30 minutes to run, during which the script will continuously provide status reports that it is running. So, Please be patient.

Important thing you need to know:

Addition to the Windows 7 SP1 or Windows 8.1 Update, you must also have installed these Windows updates:

You can manually check whether your PC contains these updates or not. In order to check the updates, type following command in command prompt with administrator privileges:

Only you have to replace the KB number with whichever update you are looking for. For the example: If you are checking update for KB number 3035583 then you have to enter the command like: dism /online /get-packages | findstr 3035583

After the search, if your PC contains that update then this command will show the package identity. For the example: if you have searched with 3035583 on Windows 8.1 then you should see this:

And if you don’t have the required Windows Updates then firstly install the updates then again run the script “ReserveWindows10.cmd” using command prompt as administrator. It would work.

If the above-explained method doesn’t work for you then probably this method “enabling Get Windows 10 app through Task scheduler” will work for sure. Here’s how:

Step (3): From the GWXTriggers folder, select “refreshgwxconfig-B” and run it.

Step (4): Now, close the Task scheduler window and restart the Computer. It should work.

I have tried only the first method and it worked extremely well for me to enable “Get Windows 10” app icon on Windows 7 taskbar. Since I haven’t used the second method, so I would recommend you to try it on your own risk.

Feel free to share your valuable thought with us through comments if this tutorial helps you to enable the Get Windows 10 App icon on Windows 7/8.1 taskbar to reserved your Windows 7 or Windows 8.1 PC for the Windows 10 upgrade.