Want to know what is the difference between paid VPN and free VPN services? Check this free VPN vs paid VPN comparison guide and learn which one is better.

This free VPN vs paid VPN comparison tutorial aims to show you what is the difference between free VPN and paid VPN services and how to choose the best VPN service for your needs at a good price.

A virtual private network (VPN) is a technology that creates a safe and encrypted connection over a less secure network in order to improve your online security and privacy.

And since your data is encrypted, so all your activities stay hidden from your Internet service provider (ISP).

In simple words, it can be said that all data transferred between your devices (computer or smartphone) and the VPN server is scrambled so that no one else can read it or use it to harm you in any way. 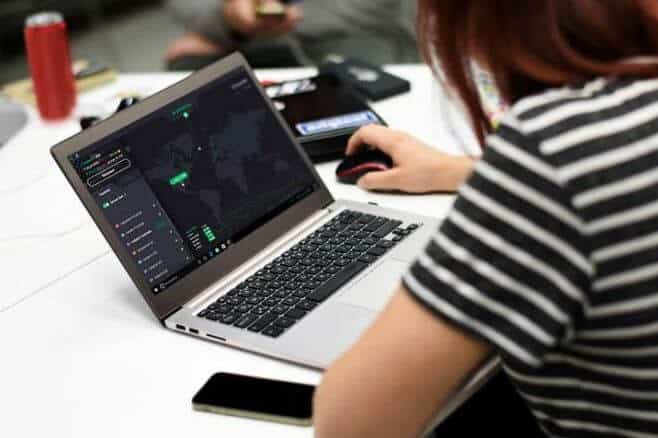 Most of us know – What is a Virtual Private Network (VPN) and how VPN works? But all of us still don’t use VPN service in most of the cases.

It’s a true fact that no one knows exactly how much secure we are whenever we browse things over the internet and that’s the main reason everyone should use some of the most powerful, reliable, and best VPN services to stay safe and anonymous online.

It might be that right now you don’t think that you really should be using a VPN service but at some point in the future, you will consider virtual private network services as important as having an active Internet connection in your home. 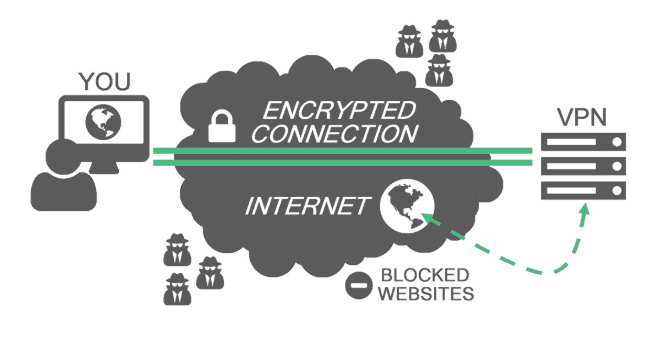 Once you have determined for using VPN services to mask your identity on the internet, now the real question comes into play is, which VPN should you use to keep your internet browsing secure and private? Free VPN vs Paid VPN services – Which one is better?

Read the below-mentioned suggestions thoroughly and learn about some of the most advantages and disadvantages of both free VPN services and paid VPN services.

What is the Difference between Paid VPN and Free VPN Services?

Who doesn’t love free stuff? We all love using free WiFi connection to browse the internet, free software for PC, free apps for smartphone, and lots of free online services, but when it comes to safeguarding our security and privacy on the internet then we need to take it very seriously and try to use the right VPN services to protect yourself.

Different types of VPN services are based on different VPN security protocols and each VPN protocol provides different features and levels of security.

What is a VPN protocol and what is the best VPN protocol to use? A VPN protocol is the combination of encryption standards and transmission protocols which determines exactly how your data routes between your devices and the VPN servers.

PPTP, L2TP/IPSec, OpenVPN, IKEv2, SSTP, and SoftEther are some of the most commonly used VPN protocols and the majority of VPN providers usually offer their users these kinds of protocols.

But the main issue is, most of the free VPN services come with only PPTP VPNs, and you should know already that PPTP or Point-to-point tunneling protocol VPN is insecure. It is one of the oldest and most vulnerable VPN protocols which have many known security issues.

On the other hand, almost all paid VPN providers allow you the option to use some most secure VPN protocols such as OpenVPN, L2TP/IPSec, IKEv2/IPSec, SSTP, SoftEther, and even SSH to tunnel your connections securely. 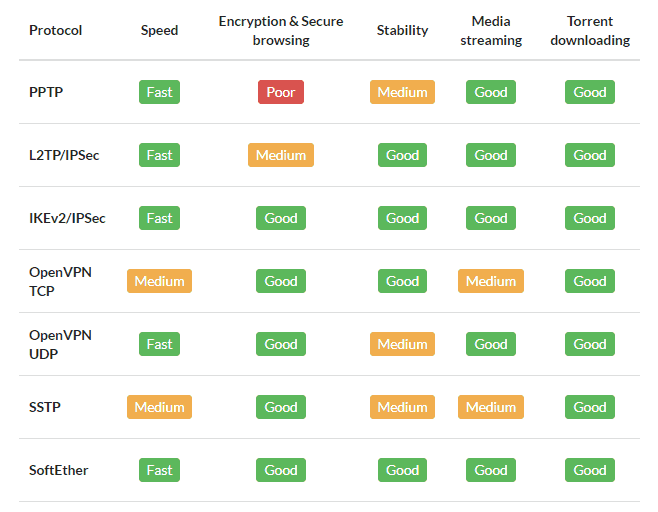 So we can definitely see that in the case of best VPN protocol to use, Paid VPN is a clear winner.

We all care a lot about how fast our Internet is, but we have also heard that using a VPN service slows down the internet connection. Well, there is some truth in this statement, no argue about that but there are plenty of situations where a VPN service, not only will not affect your Internet speed but, on the opposite, it will make it faster.

When a VPN provider offers free VPN services, there is a high chance that it would come with very low bandwidth because the bandwidth data comes at a cost and it’s not cheap to provide a VPN server able to support more than hundreds or thousands of connections at the same time.

While the Paid VPN services can easily handle thousands of connections simultaneously without affecting the internet connection speed because the paid VPN providers usually invest a decent amount of their profit on the bandwidth and servers. 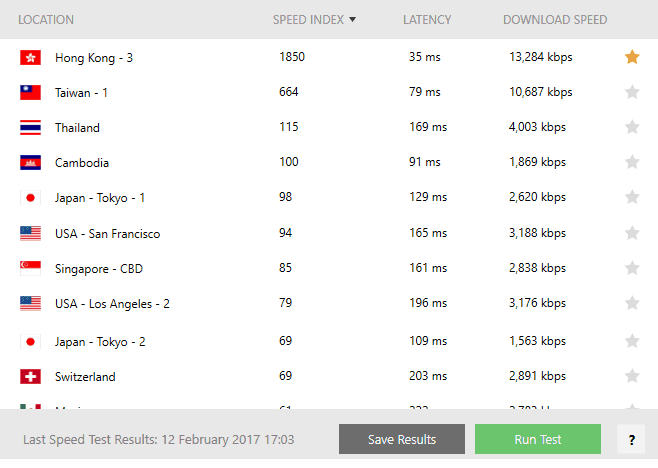 Since they invest appropriately, their VPN servers are strategically placed all around the world to help you get around any digital barriers at high-speeds. The closer a VPN server is to your location, the better the connection speed you receive.

So when it comes to superfast VPN performance and VPN connection speed, the winner here is, again, Paid VPN services.

VPN availability is also one of the most important factors which affect the VPN performance because you don’t want to unexpectedly disconnect sooner or later.

A high availability VPN is one where the VPN service can quickly and smoothly recover from the component failure, and continue to provide service.

Similar to the bandwidth problem, the lack of multiple VPN nodes and poor regional availability keeps the free VPN provider one step back in the race of providing best VPN services.

But on the contrary, all the paid VPN services make sure to maintain 99.9% uptime by investing in unlimited bandwidth and VPN nodes for all regions. So in the case of VPN high availability, again the winner is Paid VPN service.

How many servers does the VPN have and are they located worldwide? This is one of those important questions which you should ask yourself while selecting a VPN service.

As we all know, a large number of servers in multiple locations is the prime requirement of any VPN service. And if more servers mean more money to spend, then how will a free VPN provider manage to offer you the access to more than 100 servers in more than 50 different countries if their source of income is advertising only? You are getting the point, right?

On the other hand, the paid VPNs have a wider selection of servers around the world (3000+ servers in 90+ countries) and the paid VPN providers believe in offering as much VPN server locations as possible.

So when it comes to choosing the best virtual private network service on the basis of a large number of VPN servers in multiple locations then again, the winner is Paid VPN services.

In our daily life, we don’t usually use only one particular device. We connect to the Internet using a number of devices such as a laptop, desktop computer, smartphone, tablet, and many more.

So now the question is – why just secure only one device with a VPN service? If you care about your privacy and security then you have every right to protect yourself completely by taking all kind of precautions.

Luckily, a paid VPN service can be set up on almost all internet-enabled devices. With paid VPN, no matter which version you use, you are guaranteed the connections for multiple devices.

In this case, the majority of free VPN providers are still unable to provide multi-platform support. So again, the clear winner is Paid VPN services.

In the success of any online services, customer support plays a vital role. Same goes for the VPN service, but the free VPN providers don’t cater to the needs of their users because the customer support comes at a cost.

While if you use a paid VPN service, a dedicated support team stays available 24/7/365 for you via live chat or email to assist you whenever needed. 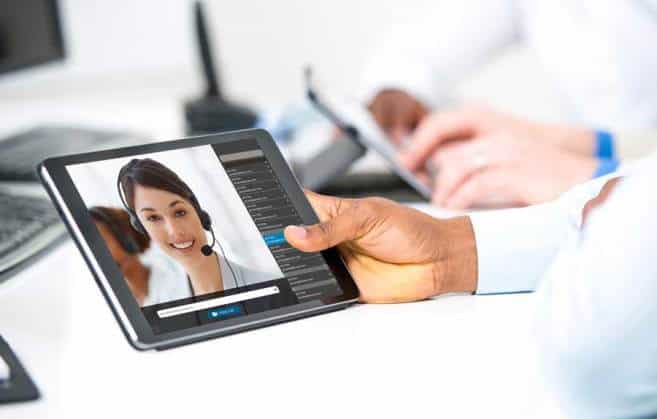 Since you have paid for the subscription, so it doesn’t matter what time of the day, you’ll always find the customer support of a paid VPN service to be ready and polite in resolving issues. So again, the clear winner is Paid VPN services.

Anonymity on the Internet

When it comes to the matter of browsing the web anonymously without leaving traces then few free VPN services might come in handy. Because there are some free VPN providers that normally won’t ask you to sign up in order to use its VPN services. And in case, if you are asked to sign up then you can easily use fake user ID, passwords, and other details.

But if you want to use a paid VPN service then it would ask for your correct details for authentication which will be also used during the payment process (i.e. PayPal, Credit Card, or any other payment mode).

Although in this situation, free VPN services seem like a winner as you don’t have to provide your real details. But you can’t hide your IP address from the VPN providers. In simple words, it can be said that surely you are kind of “anonymous” for not providing your actual contact details, but your IP Address is still the same.

So it doesn’t matter whether you are using a free VPN service or paid VPN service to browse the web anonymously, the VPN provider can easily log your online activity if they want.

So these are some of the noticeable differences between free VPN and paid VPN providers. You should consider all these things while selecting the best VPN services for yourself.

After seeing the above mentioned free VPN vs paid VPN comparison, we hope now you know which VPN is best and which VPN service you should choose in order to protect your privacy and keep your information safe from prying eyes.

Did we miss something in this paid VPN vs free VPN comparison guide? Feel free to let us know using the comments section below.