Do you want to know exFAT vs NTFS vs FAT32 which file system is better? Find out what is the difference between FAT32 and NTFS and exFAT file systems.

What is the difference between FAT32 and NTFS and exFAT file systems? exFAT vs NTFS which is a better format for the external hard drive?

These are some of the most frequently asked and most widely searched terms over the internet, and that’s the main reason for us to bringing out this file system comparison guide.

Whenever you install a Windows operating system on your desktop computer or laptop, it gets installed on a partition with the NTFS file system. And if you are using any removable disk drive or USB based storage devices then the FAT32 file system is used there. Similarly, another file format which is associated with removable drives and USB Flash drives is exFAT. 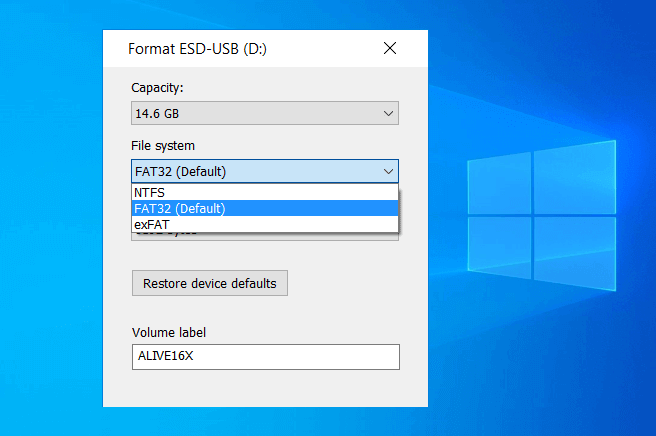 These are the three top and most common file systems which are used in Microsoft Windows operating systems, but now the question is, what do these file systems do exactly? And what is the difference between FAT32 and NTFS and exFAT file system? Fret not, we are going to explain everything and answer all your queries related to these file systems.

So, without any further ado, let’s begin and learn which file system is best. But before we go further and find out the difference between these file systems (exFAT vs NTFS vs FAT32), it is important to understand what we mean by a file system.

Do you know? How to Create and Format a Hard Disk Partition in Windows 10

What is a File System?

exFAT, NTFS, and FAT32 are some of the most popular file systems and widely used across various devices. So now, if you want to understand the difference between FAT32 and NTFS and exFAT file system then you will have to know about each of them in detailed. So, let’s begin.

What is FAT32 File System?

FAT32 (FAT stands for File Allocation Table) is one of the oldest file systems which is known to us. Since its inception in 1977, the 8-bit FAT file system was created for Microsoft’s Standalone Disk Basic-80. Later improvements were done in the FAT structure and it was implemented in the 8080/Z80 platform of Microsoft.

FAT12 and FAT16 file systems were also created which were used for organizing files in a much efficient way. The latest version of File Allocation Table available right now is FAT32 which we use these days to store data in our external drives.

Basically, FAT32 is an advanced version of FAT16 as it adds more to the volume size. This file format was released along with Windows 95 which makes it possible for one to store files with a maximum size of 4 GB. Maximum disk size which you get with FAT32 is 16 TB (Do you think the FAT32 file size limit is enough?).

When it comes to FAT32 vs NTFS and FAT32 vs exFAT file System, the basic difference which we see here is that we can’t install heavy applications or use this file system to store large files. This is one of the reasons that most of the latest Windows operating systems use NTFS file format where there are no restrictions of disk size.

What is NTFS File System?

Now that we know about the FAT32 file system, let’s discuss the NTFS file system. NTFS (also known as Net Technology File System) is Microsoft’s proprietary file system. It was introduced in 1993 and was seen with the Windows NT 3.1 operating system.

As we already mentioned before, the NTFS file system is well known for inexhaustible file size limits. Development of this file system started way back in the 1980’s as both IBM and Microsoft planned to create an advanced operating system which delivered better performance when it comes to graphics.

Things didn’t turn the way as it was expected as both the companies parted their ways with each one developing their own file system. HPFS was developed by IBM in 1989 which was seen in the OS/2 Operating system whereas Microsoft launched NTFS v1.0.

You get to see new add-ons like self-healing, partition shrinking along with NTFS symbolic links. The capacity of NTFS was upgraded with Windows 8 and the maximum FAT32 file size limit was seen as 256 TB with Windows 8 operating system.

Few other features which we find interesting when it comes to NTFS file system are disk usage quotas, sparse file support, reparse points, file-level encryption, distributed link tracking. These features add to the difference between NTFS and FAT32 and the difference between NTFS and exFAT. As this file system supports backward compatibility, it makes it easier for one to get inter-operating system compatibility.

NTFS is a well-known file format when it comes to getting back the lost data. When someone asks us, which is better NTFS or FAT32 or exFAT file format, we always go with NTFS as it helps in reviving corrupt files on a system faster than others.

It automatically maintains a journal in the form of a data structure which keeps track of any important modifications done by the user to their file system. If changes made lead to problems, NTFS uses those patterns to recover the file system and get back the normal state of our system.

NTFS is perfectly compatible with Windows XP and all other latest versions of Windows. You will also see read-only NTFS file system in MAC OSX and few variants of Linux come with NTFS write only support.

What is exFAT File System?

This is the main reason, all the SDXC memory cards come with exFAT file format which is lighter than NTFS and supports files with size more than 4 GB. Copying movies and high length videos are of no trouble when it comes with an exFAT memory card. However, if we plan to copy a file big enough from a FAT32 format memory card then it is not possible.

Microsoft is having the patent which comes under Patent number 8321439 and uses name hash for Quick File name lookup. Using this method, file search speed gets enhanced which helps in easy searching and copying of files. Microsoft has not published specifications for the exFAT file system and in case any vendor wants to use the same, they need to get a license from Microsoft.

You might also like: What is a .DAT File and How to Open DAT Files in Windows 10?

What is the Difference Between FAT32 and NTFS and exFAT File Systems?

After reading all the basic information explained above, we know everything about all these three popular file formats (FAT32, NTFS, and exFAT), so now it’s time to know the technical difference between NTFS and FAT32 file system, and exFAT file system.

👉 Compatibility: Works well with Linux, MAC and Windows machines. Can be used on Gaming Consoles as well and also on USB compatible devices.

👉 Compatibility: Works well for Windows machines and Xbox One. Comes with Read-only support of MAC and Linux.

👉 Cons: Not cross-platform compatibility like we get in FAT 32.

👉 Compatibility: Compatible with Windows XP and higher versions. Mac OSX 10.6.8 and above versions also work well along with Android.

👉 Pros: Works like an intermediate between NTFS and FAT32 by delivering unlimited file and partition size.

We hope that after reading this detailed file format comparison (NTFS vs FAT32 vs exFAT) guide, all your doubts regarding the difference between FAT32 and NTFS and exFAT file systems are cleared. What are your views on these different file systems? And according to you, exFAT vs NTFS which is a better format for an external hard drive? Do let us know using the comments section below.