Android games have gained a lot of popularity over the past few years. This has resulted in a huge variety of games in Google Play Store. If you like to play action games or first person shooter games then you must try shooting games for Android devices. 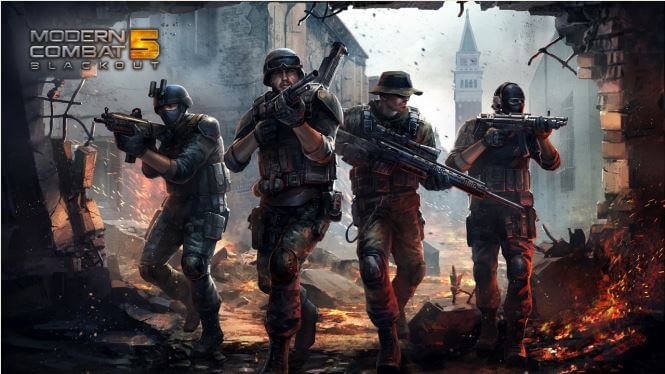 To make it easy for you, we have creates a list of best android shooting games. Have a look at our list of top 10 best shooting games for Android phones and tablets of 2017.

So, now let’s check out the list of top 10 best shooting games for android 2017. We are quite sure, you will like them:

Modern Combat 5 is the fifth Modern Combat game. The game is developed by Gameloft, which is one of the best developers of free shooting games. The game comes with beautiful graphics and gameplay.

Take down all your enemies and complete the missions. The game also has the multiplayer game mode where you can play with your friends.

The next game which makes to our list of best shooting games is Dead Trigger 2. Dead Trigger 2 is the successor of Dead Trigger Android game where you are attacked by zombies. Kill all the zombies in the infected regions in Dead trigger 2.

There are different missions in which you have to kill different types of zombies. You will find some of the most deadly weapons in Dead Trigger 2.

ShadowGun: Dead Zone is the fourth game which makes to our list of best shooting games for Android. ShadowGun is ideal for people who want to play first person shooter games in multiplayer game mode.

The multiplayer game mode comes with a lot of features. You can not only play with your friends but also with random players which are playing ShadowGun: Dead Zone.

Not only you have to hunt deer, but you will also come across exotic animals from time to time. Keep an eye on them and hunt them down.

You are the leader of the special operations team and you have to carry out all the drills in the game. Survival mode, combat mode are some of the game modes which you will find in best android shooting games.

You don’t have to take down any terrorist or zombies in Fields of battle. Fields of battle is a free game for android phones where you have to play paintball matches. One has to be sneaky and should have tactical skills in order to complete all the missions in the game.

Another interesting game related to zombies makes to our list of best shooting games for android device. Into the dead is the combination of endless runner and first-person shooter game. You have to run as far as you can and kill all the zombies which come in your way in into the dead.

The last best shooting game for android phones is Modern Combat 4: Zero hour. The game has amazing graphics and when you will play this game on your smartphones or tablets you will feel as if you are playing the game on your gaming console. The game is similar to Call of Duty.

Have You Got Some Interesting Android Shooting Games?

Let us know using the comments section below – which first person shooter game are you playing on your Android smartphone? Or, which best shooting games for android you will like to have on your android devices?