Are you a globetrotter? Or perhaps a digital nomad? Do you enjoy visiting parts of the world many others may not even have heard of?

In this guide, we are compiling a list of the top best language translator apps for travelers which will help you communicate with the locals with ease as well as allow you to understand what they are trying to communicate to you. 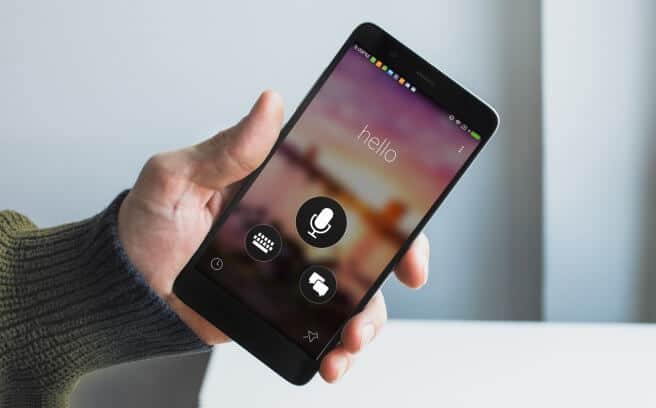 So, without further ado, let us jump right into it and see which is the best language translator app for Android and iOS devices to use in 2020.

Kicking off the list with iTranslate Translator and Dictionary, a highly rated and well-reviewed translation app which is free to download and use. The app is available for both Android and iOS devices and also has a specially modified version for the Apple watch so you can talk to anyone and quickly translate it using your watch. 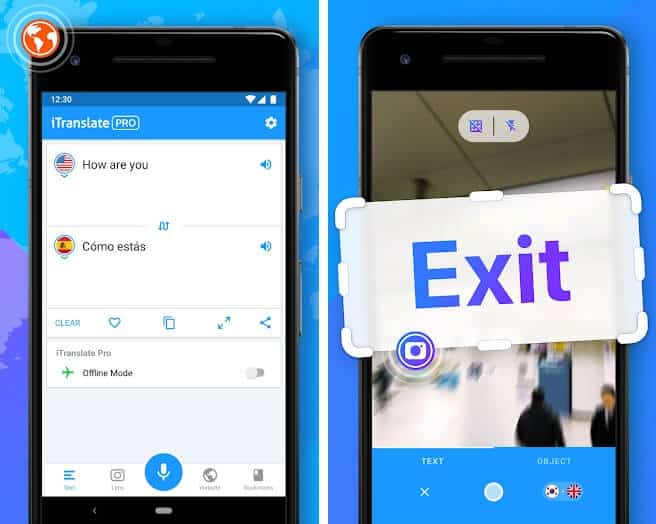 iTranslate app allows for translation in over 100 languages and if you have the pro version of the app which is about $6 per month then you get features such as offline translation, translation using the camera, voice-to-voice conversations, and much more. This is a must-download language translation app for frequent travelers. 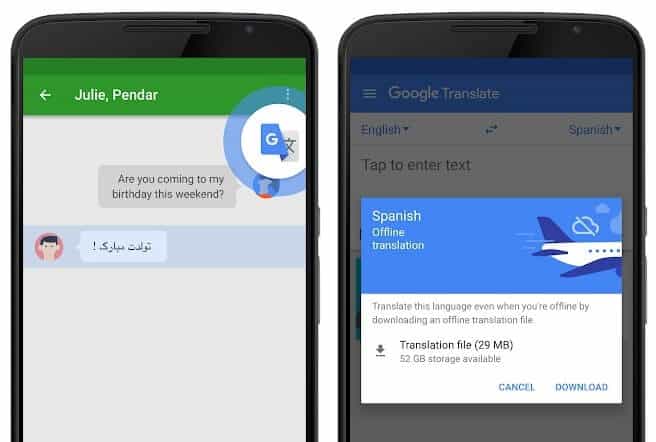 Instant bi-directional speech translation is also supported by this versatile tool made by Google. The UI is very easy to use and literally, anyone can use the app. This is my top pick for a simple and easy to use language translator app. One of my personal favorite translation app for iPhone and Android devices. 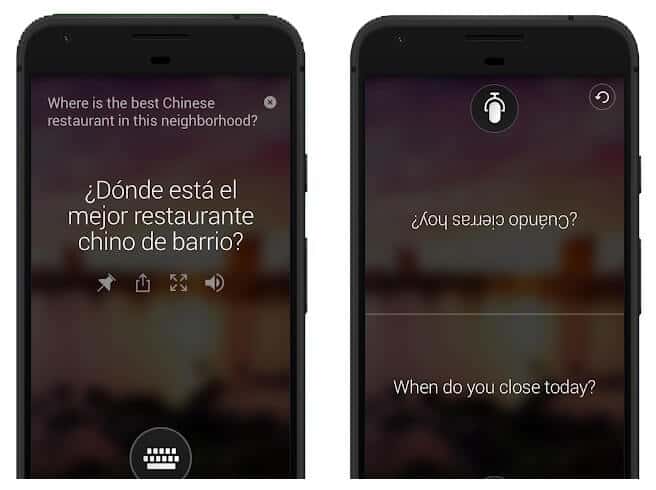 As an added bonus, it also shows you how to properly pronounce certain words and phrases which you can use to impress your colleagues. Overall this is one of the best language translation apps for travelers who travel for business. The app also keeps improving with time since it is backed by data from Microsoft.

A free language translator, Naver Papago – AI Translator currently only supports 13 languages. This smart AI translator app helps you translate text to voice and vice versa in real-time and also allows you to translate images. You can also converse with others using the app and it will translate from both speech sources simultaneously in a language of your choice.

And if you were in search of the best offline language translator app for Android or iPhone then you can proceed with the Naver Papago translation app and use it completely offline as well. The app also offers a Papago Kids functionality which teaches basic language using flashcards to kids. 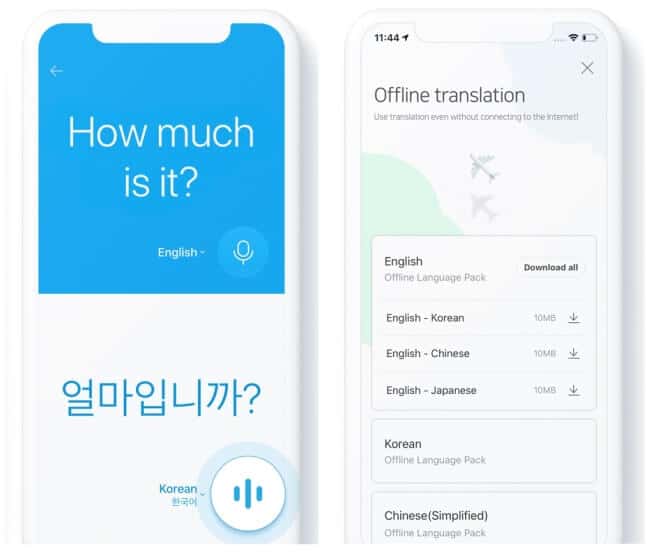 You can choose the context of your translation for a more appropriate translation. In simple words, Naver Papago is a really great language translator app that you must try once for sure. The app is primarily aimed at the Asian market. Oh, did I mention? The app icon is so cool.

This app is much more than just a language translator app for Android and iOS devices. TripLingo is an ultimate app for travelers, it allows you to translate your voice to the fit region you are traveling to, translate images so you can easily read the menus and other things as well as give you the ability to use WiFi calling with plans starting at fairly affordable prices. 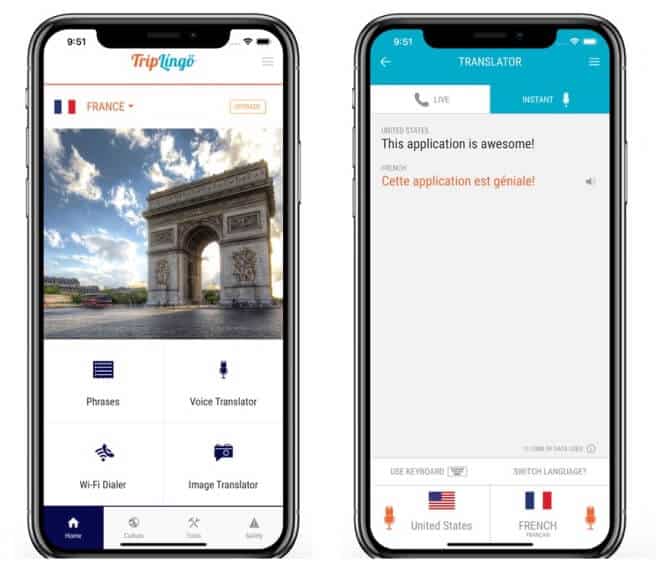 You also get an option to learn common key phrases and a basic guide about the culture of the country which will include norms about the safety, tipping and other such things that will help you fit right in. you can also select phrases based on the content and emotion such as humor, nightlife and much more.

In simple words, we can say that TripLingo is one of the most appropriate and great translation apps for iPhone and Android if you want to fit into a new country just like a local.

If you want your translations to have a human touch then Day Translations is one of the most convenient language translator apps you need. If you need to quickly translate something then you can simply use the AI-generated translation feature. However, if you need to send a business email then you can use the contact a human translator feature to help you out which gives you a dedicate human who speaks the language you wish to translate to natively. 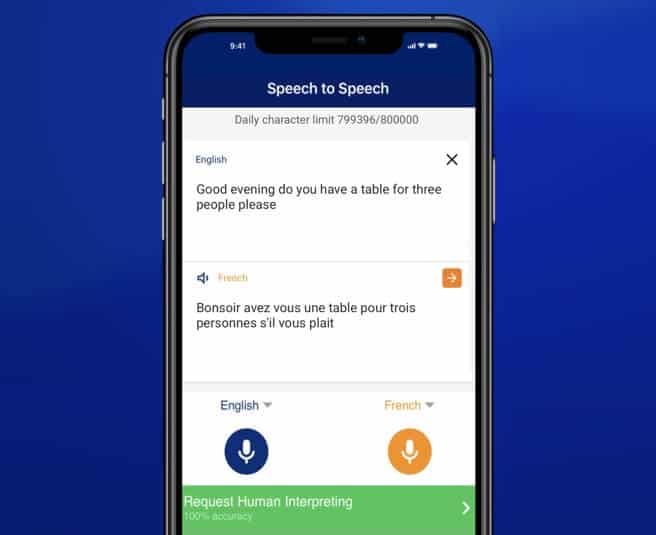 You can also listen to the correct pronunciations of the words so that you can correctly emulate the way to speak. This powerful and best language translation apps for Android and iPhone currently allows you to translate from over 100 languages for text and over 30 for speech. The professional translations app is primarily suitable for people who need a human translator to run a global business.

A very highly rated language translation app for iOS devices, Speak and Translate supports translation from over 115 languages. You can also translate speech from over 52 languages using this voice and text translator app. The app supports apple’s speech recognition technology and integrates very well with iCloud allowing you to store your translation history as well as sync your data between various devices. 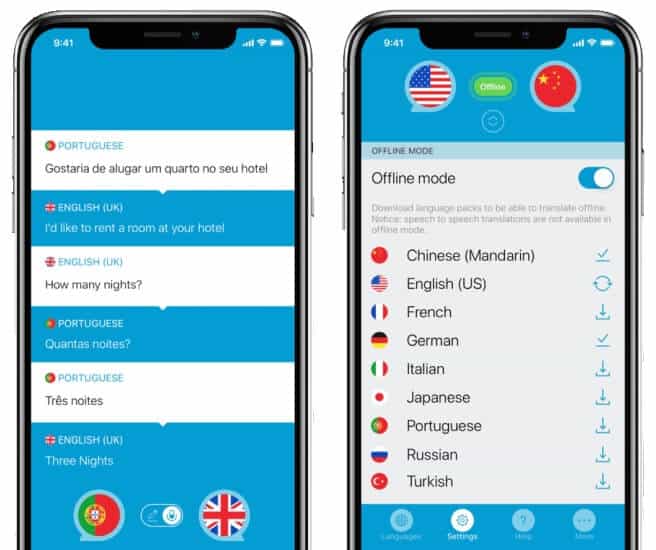 This voice language translator app for iPhone users is amazing but the downfalls are plentiful as well. For starters, the app always needs to be connected to the internet to work, the ads are always very prominently displayed and also there’s a cap on the number of translations you can perform in a day. All these can be removed as hindrances if you purchase the premium version.

SayHi Translate can help you record your voice and translate it to over 90 languages and in multiple dialects. Once translated, you can playback the translation in a woman’s or a man’s voice and adjust the speed as you desire. You can also translate using text if you prefer that. Image translation is also available and comes in super handy especially in Asian countries thanks to the support for Asian characters. 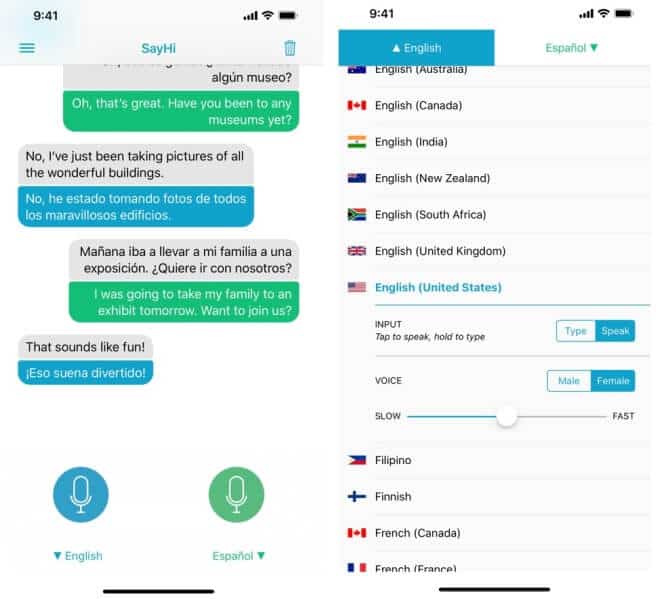 You can also share the translation through email, SMS, or social media which comes in handy for transnational business leaders. The biggest downfall for this language translator app is that you must have a constant internet connection for the app to function.

Dictionary Linguee, developed with the help of over 400 lexicographers is primarily a dictionary app that helps you translate or understand certain words in other languages. The app is free and works reliably when translating. The selection of languages available for translation is limited but it covers most major languages like English, French, Japanese, Dutch, Russian, Spanish, Polish, Italian, and Simplified Cantonese.

This powerful and best language translator app for Android and iPhone also has a feature that allows you to quickly search for commonly used phrases and also helps you autocomplete your sentences similar to Google on their search. The app also helps you correct any spellings that may be wrong and recommends the appropriate terms. 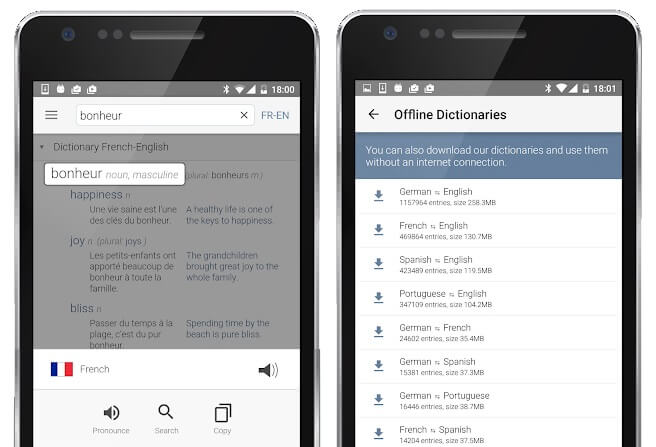 The pronunciation guides are available in both speech and text and the speech pronunciations were recorded are professionals. The app works well online as well as offline so you are covered even when you don’t have the internet connection on your phone (which is very rare in 2020). Try out the app today!

If you want a free language translator app that helps you collate translations from multiple different sources then Translate Box is what you need. Translate Box allows you to translate photo, voice, and text using 5 apps at once. You are shown translation from Google Translate, Microsoft Translator, Yandex Translate, Baidu Translate, and Papago Naver Translate all in the same window. 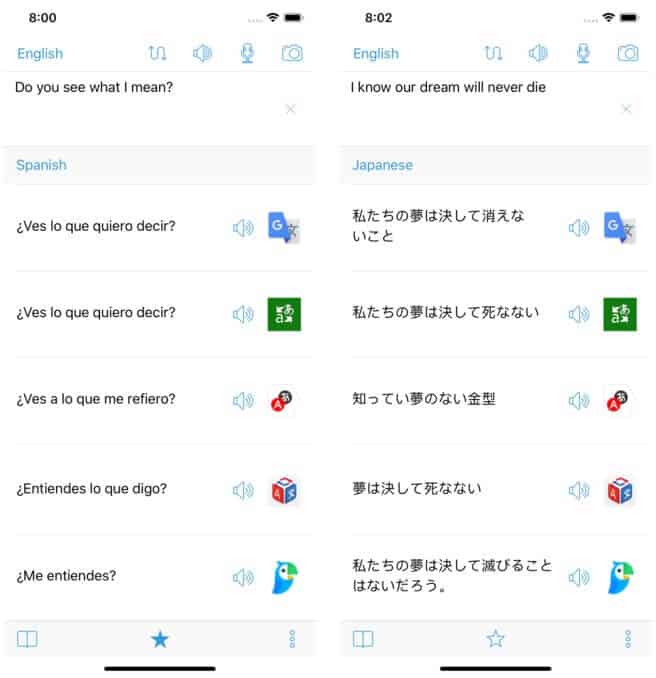 The key USP of this language translator app with the camera is its ability to translate complete and entire websites that come very handy at times. The free version has some limitations but once you buy the premium version most of them are removed. You must have an active internet connection at all times to use the app though, so keep that in mind.

If the real-time translation is something you are looking for then I would suggest you give this amazing and attractive language translator app for iPhone a try. iTranslate Voice is fairly similar to SayHi and allows you to translate anything to over 42 languages once you record your voice. You can also record the response from the other person and have it translated to your language for easier understanding. 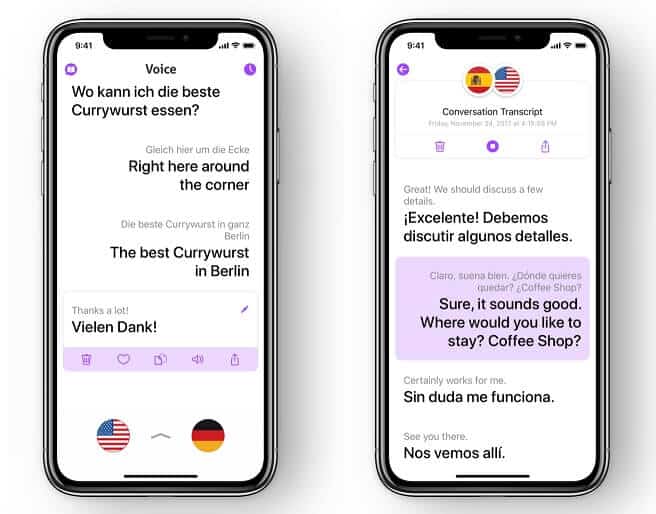 If you have multiple devices with the language translator app on them then you can connect them together to have a convenient conversation even with people whose language you don’t speak. Various other features come standard in the app. The pro version costs $5 a month whereas you can use the free version that comes with limited abilities at absolutely no cost.

If you are an Android user who’s looking for a very simple translation app to translate basic things from one language to another then All language Translator Free is the app you should look towards. You can also share your translations very easily on social media, from the app itself, if you wish to share them with someone. If you are conversing with someone over email and wish to impress them then you can also translate and copy your results in one click which is pretty neat. 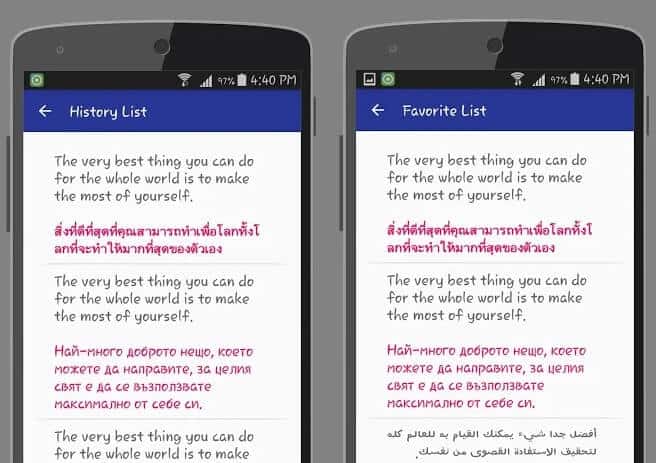 The translation is also possible with a recording of your voice and a 2-way conversation is made easy thanks to the voice translation feature. Overall a decent language translator app for Android users who like traveling or just want to use for daily purposes.

This free translation app looks like it came straight out of early 2010 where no one cared about the design of apps. Language Translator may not be the best language translator app for Android devices but it is certainly a good one if you want a quick way to translate text from one language to another.

You can easily copy the translation in just a single click and also share it on various platforms if you wish to do so. This language translation app supports over 90 languages and allows you to translate the text as well as speech with relative ease. 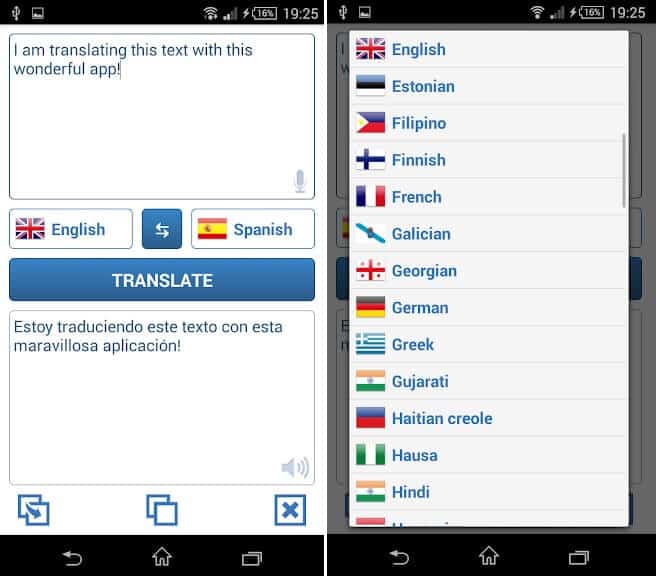 The app is primarily marketed towards people who wish to translate from Spanish to English and vice versa but it does support many other languages. The only downfall I would consider for the app is that you need to have a stable and constant internet connection to use this Android language translator app.

This comprehensive list features some of the best language translator apps for travelers which you must download if you travel frequently or if traveling is a part of your job or business.