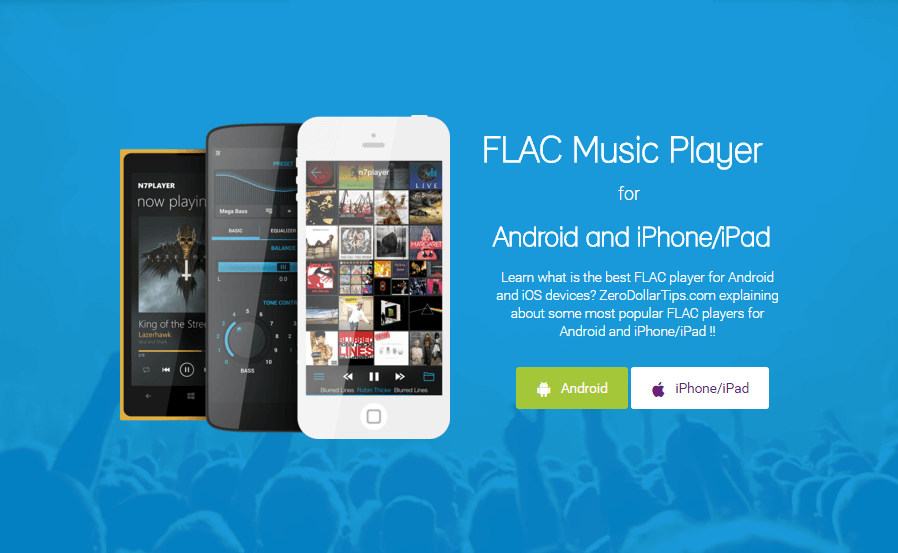 DeaDBeeF is a Flac player for Android which is capable of playing a variety of online radio as well as audio formats. This player consists of an equalizer with 10 bands which also supports headset media buttons. Full Unicode support and automatic CUE support are important components of this Flac player. The 10 bands allow you to vide album art and tags of the music file.

VLC Music Player for Android is absolutely free to use and it comes with its very own equalizers, filters and full- fledged database. It is basically an open-source multimedia player which is capable of playing almost all audio and video files. It comes with zero in-app purchases, spying and absolutely no ads. There are also widgets for audio media library, cover art, and audio control.

Poweramp Music Player is a great Flac player for Android which supports a large variety of files. It comes with a 10- band optimized graphical equalizer and includes features such as crossfade, openGL- based cover art animation, replay gain and dynamic queue.

jetAudio is one of the best Flac players for Android with 10/20 bands graphic equalizer and plenty of different sound effects. It supports plugins such as AM3D audio enhancer and Crystalizer among others. It supports majority of digital music files and supports features like Wide, Reverb and X- Bass, etc.

n7player Music Player comes in both free and paid versions and it allows you to customize all the elements of your music player. Tag editing, album art grabber and scrobbling, etc. It comes with a unique user- interface and supports several different media formats.

Play FLAC audio files on your iOS devices by utilizing these best FLAC players for iPhone/iPad:

FLAC Player+ by Khoa Tran Anh is a Flac player for iPhone which enables you to listen to good quality music on your iPod Touch and iPhone. Using it, you can manage all songs through artists, genres, albums and playlists. It supports 24- bit audio output and its features include Wi-Fi transfer, background audio, and Bluetooth headset, etc.

VLC Player works across all iOS devices and also supports Flac. It is absolutely free, open source and is a type of portable audio player which supports almost all audio and video formats along with DropBox file synchronization.

You can enjoy music in several formats using this Flac player for iPhone. VOX – Music Player for FLAC & MP3 by Coppertino Inc. has a unique design, along with gesture-based interface, music playlist in offline mode and sound equalizer. It is basically an All-In-One player which connects with all music sources, such as online radio, iTunes, Flac’s personal collection, etc.

FLAC Player by Dan Leehr L.L.C. is also one of the best FLAC players for iPhone which also supports live recording. You can create and edit the playlist of this player and it also supports AirPlay audio output. This music player comes with original audio phone quality music and produces lossless and gapless Flac albums. Browsing by artists, albums, Bluetooth headphones support and shuffling/ playing entire playlist are its key features.